Mickey was on the ship’s football team, and they were getting ready to play the USS Arizona on December 7, 1941, at 1:00pm, for the fleet championship.

Because the USS Pennsylvania was in dry dock for repairs, Mickey and his teammates had to don their football uniforms before leaving the ship at 8:00am to practice before the big game.

But just 5 minutes before they were to leave the ship, the first air attack by the Japanese commenced, and “General Quarters” sounded throughout the ship.

“Hearing the alarm, you report for your battle station immediately – in whatever you are wearing,” Mickey remembers, adding, “As my battle station was in the crow’s nest of the main mast, I reported there in my football uniform, minus cleats and helmet. The shoulder pads made it difficult to get through the trapdoor. One 500-lb bomb hit our ship during the second air attack.” (Source: The Greatest Generations Foundation Facebook Page)

One bomb missed him by just 45 feet, Ganitch recalled, but from his crow’s nest battle station, he saw it all.

The Downes belched a half ton of torpedo tube onto his ship’s forecastle before being damaged by the Cassin’s rollover. The USS Shaw exploded. The Nevada tried to steam clear – until ordered to stop before she could be sunk to block the harbor. A friend wriggled from a porthole on the Oklahoma. “It was less than 20 minutes before it was lying over on its side,” he said.

America grew up. “We were united. We had to defeat the enemy.” A seaman first class that day, he rose to chief petty officer in four months through study and diligence. As a quartermaster, he steered the 33,000-ton Pennsylvania. “We didn’t have GPS,” he said. “We had to use the stars and the moon.” Once, he steered so hard over that an oncoming torpedo shot clean under her. 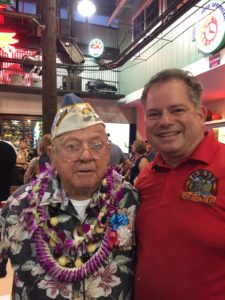 Tin Hut BBQ founder Frank Diaz was humbled and honored for the privilege of seeing and making history, and serving Mickey “Mic” Ganitch and fellow heroes; great men honored at the 75th Anniversary of Pearl Harbor at the Hawaii Remembers Block Party hosted by The Brewseum on Sunday December 4, 2016.